Travelers from Hawaii, South Dakota and the Virgin Islands are added to list of 33 states and territories ordered to quarantine in New

Tom Hanks' voice to be added to Oakland A's artificial crowd noise
Fears for holidays as travel experts warn France 'is highly likely' to be added to quarantine list
Aviation added 26 BILLION tons of CO2 in 20 years, accounting for 3.5% of impact on global warming


Travelers from Hawaii, South Dakota and the Virgin Islands are added to list of 33 states and territories ordered to quarantine in New York state as Alaska, New Mexico, Ohio and Rhode Island are removed

By Emily Crane For Dailymail.com

Travelers from Hawaii, South Dakota and the Virgin Islands have now been ordered to quarantine for 14 days if they travel to New York.

New Gov. Andrew Cuomo on Tuesday added the three regions to his list of 33 states and territories with high coronavirus infection rates that need to quarantine if they visit his state.

Alaska, New Mexico, Ohio and Rhode Island have now been removed from the list due to declining infections.

The quarantine order is part of a joint travel advisory with New Jersey and Connecticut to help curb the spread of COVID-19 in the tri-state area. 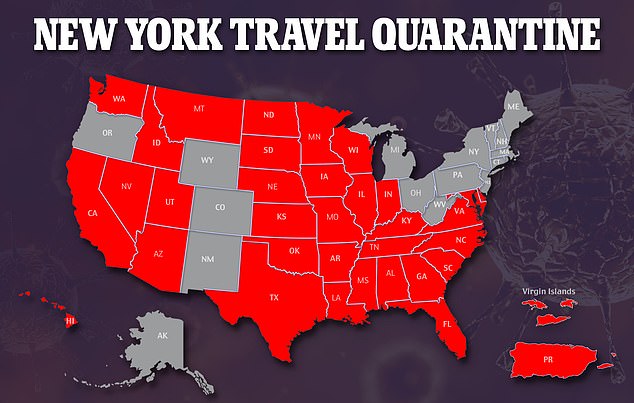 Travelers from Hawaii, South Dakota and the Virgin Islands on Tuesday were ordered to quarantine for 14 days if they travel to New York. Alaska, New Mexico, Ohio and Rhode Island have now been removed from the list due to declining infections

Travelers who are currently quarantining after visiting the four states that have now been removed from the list should still isolate for the full 14 days, Cuomo said.

Hawaii has managed to keep the virus at bay for most of the summer, but new cases more than doubled last week to over 1,200.

Governor David Ige said last week that he would be reinstating his own inter-island travel restrictions that require people to quarantine for 14 days in a bid to curb the spread.

Hawaii currently has more than 3,400 in positive cases and 31 deaths. Its positive test rate is currently 8.5 percent, according to John Hopkins data.

In South Dakota, new cases have increased for the third straight week. More than 100,000 motorcycle enthusiasts are expected to attend a 10-day annual rally in Sturgis that began on August 7.

South Dakota currently has more than 9,600 cases and 146 deaths. The state’s current positive test rate is 9.4 percent, according to John Hopkins.

Cuomoa, a Democrat, started the travel ban list back in June as Sunbelt states started to see spikes in coronavirus infections as the pace of the outbreak started to accelerate.

New York, which was the initial epicenter of the US outbreak, has maintained lower infection and deaths rates since hitting its peak in April.

‘New York went from one of the worst situations in the country, to an example for the rest of the nation to follow,’ Cuomo boasted on Tuesday.

‘Our numbers continue to remain low and steady, which shows this virus will respond to an approach based on science, not politics.

‘In order to protect this progress, we must keep up our efforts – we cannot go back to the hell we experienced a few months ago, which is why we are adding Hawaii, South Dakota and the Virgin Islands to the travel advisory.’ 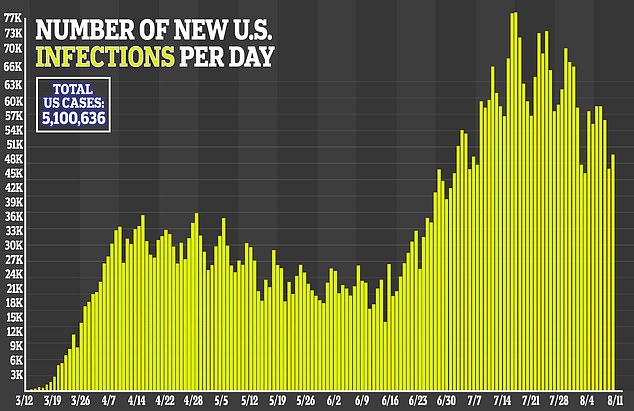 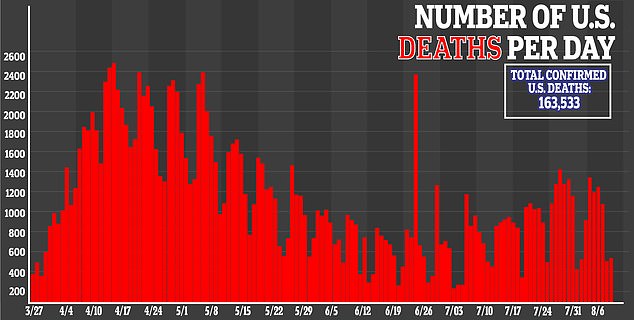