A chilling scene befitting a horror film played out on a popular lakeside beach in Toronto last weekend when a pair of shirtless men covered in blood and brandishing chainsaws charged at bystanders.

The bizarre incident unfolded on Sunday morning at Cherry Beach and was captured on video.

A short clip that has been making the rounds on social media shows two bloodied men wielding power tools walking towards a group of beachgoers, yelling: ‘You’re f***ed.’ 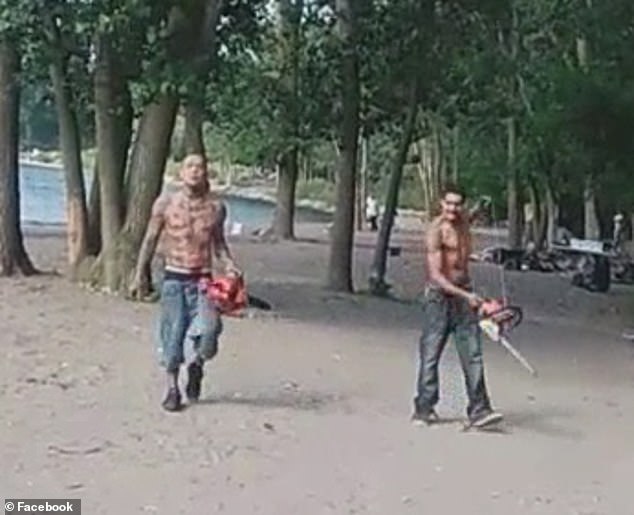 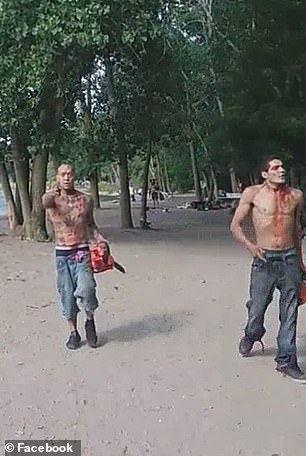 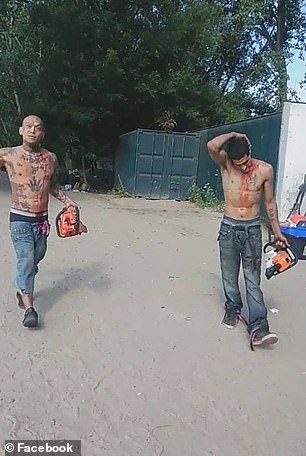 Police said the shirtless duo had sustained injuries during an earlier fight and later returned with ‘weapons.’ Videos of the incident have been circulating on social media 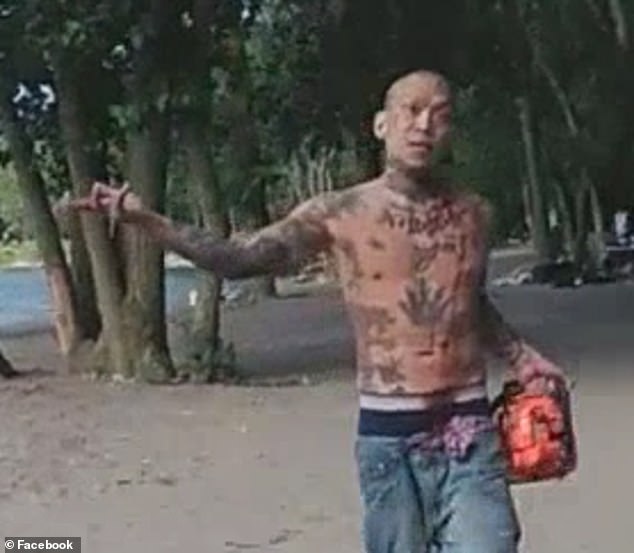 This man is heard in the video yelling at bystanders: ‘Who the f*** hit me?’ 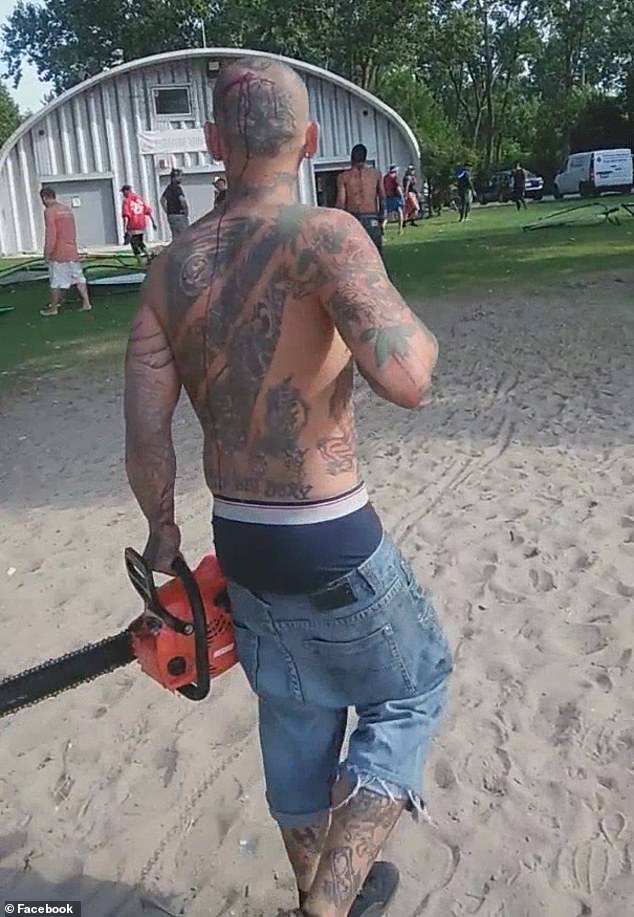 Blood can be seen streaming from the back of the man’s tattooed head, down his bare back

As they rev up the chainsaws in their hands, one of the men seen covered in tattoos shouts at the fleeing onlookers: ‘Who the f*** hit me?’

A second video that has been circulating online shows the bare-chested duo being arrested by police.

‘I told you you’re gonna go to jail,’ a man recording the video yells at the men laying face down on the ground, surrounded by police officers training their Tasers on them.

One of the suspects screams at the officers, ‘Look at our f***ing head,’ pointing to injuries they purportedly had sustained during a prior incident.

Toronto police have confirmed that they were called to the beach just before 10am for reports of a massive brawl, according to Toronto City News.

‘It is alleged that two men involved in the original altercation suffered injuries. They then left and returned with weapons,’ police said in a statement without specifying the nature of the weapons.

Police said both men are facing charges, but their names have not been released because they are also considered victims. 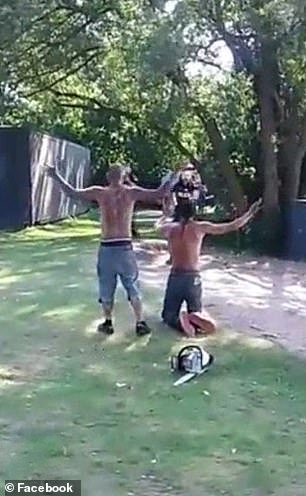 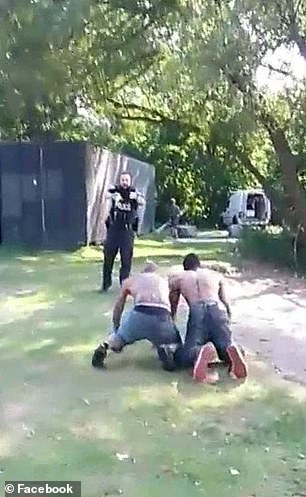 Police responded to 911 calls reporting the incident and quickly cornered the shirtless men. They ordered them to lay down on pain of being tasered 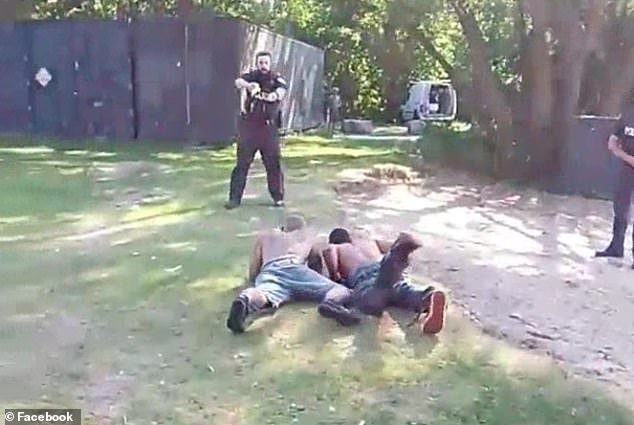 One of the suspects scream at police, ‘Look at our f***ing heads,’ referring to their injuries 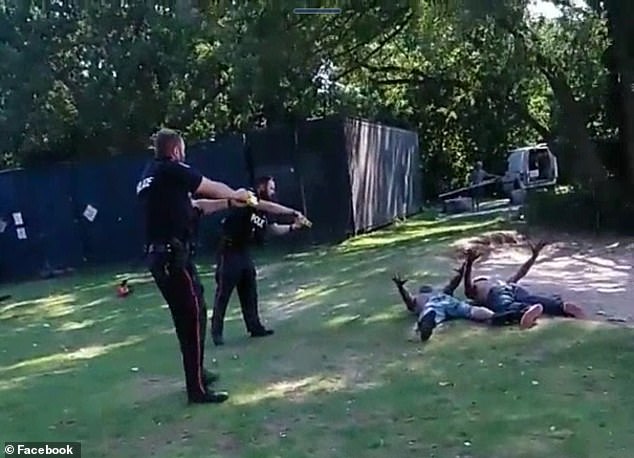 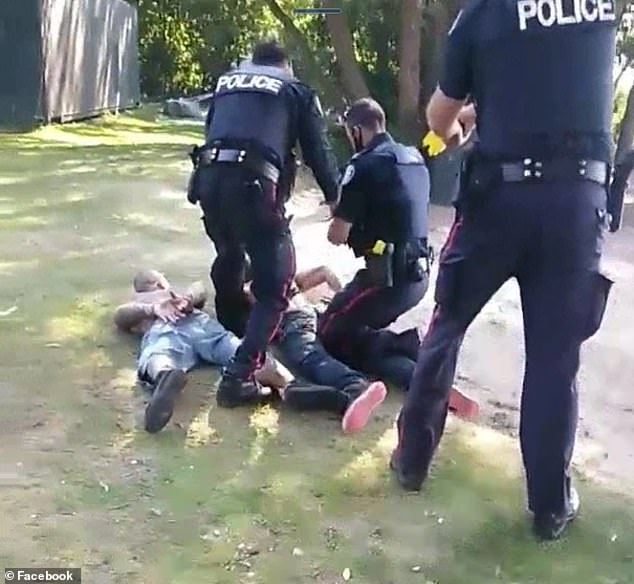 Both men are facing unspecified charges stemming from the chilling incident

No injuries were inflicted on anyone by the chainsaws, police noted.

Witnesses quickly took to Twitter to share news of the terrifying ordeal worthy of a slasher movie.

‘Encountered two man bleeding, carrying running chainsaws on my morning ride on the trail leading to Cherry Beach from Tommy Thompson,’ said Valeria Laurin. ;Let me repeat: RUNNING CHAINSAWS. Face to face with them in the middle of the trail… SCARY AF out of a fucking movie… WTF Toronto.’

In recent weeks, Cherry Beach has become a site of weekly gatherings organized by people protesting the wearing of face masks to stop the spread of the coronavirus. 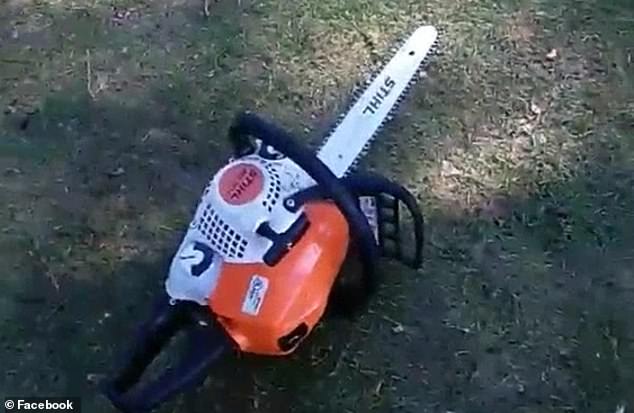 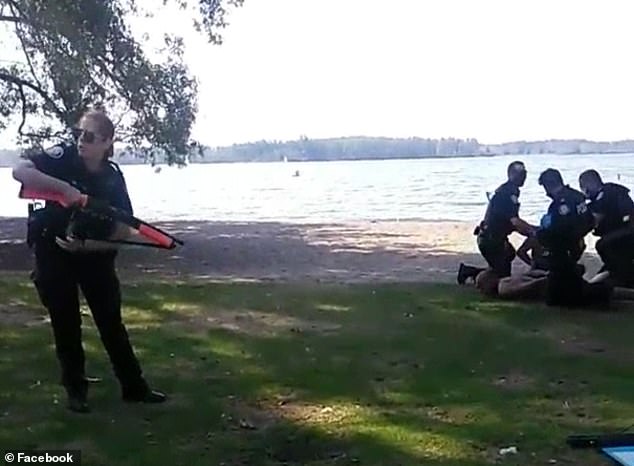 The so-called anti-maskers have been known to rally at Queen’s Park on Saturdays, before heading to the beach for an after-party, as blogTO reported.

Toronto anti-mask activist Chris Sky, whose real name is Chris Saccoccia, spoke to Rebel News about the incident, saying the shirtless men showed up on the beach as the party was winding down and had some words with someone.

They later returned carrying chainsaws and allegedly turned their anger at a DJ who was packing up his equipment and helping clean up.

‘Like any sane person would do, he kept his distance between him and them and they literally went and cut all his equipment right in half,’ said Saccoccia, who estimated the damage caused by the chainsaws at $4,000.

It remains unclear what sparked the initial brawl that left the shirtless men injured and gushing blood.

Toronto Mayor John Tory said the city will be keeping a ‘very careful eyes’ on gatherings at Cherry Beach.

Devonta Freeman working out with Giants after Saquon Barkley injury

Devonta Freeman working out with Giants after Saquon Barkley injury 0

Giants’ options to replace Saquon Barkley are far from ideal 0